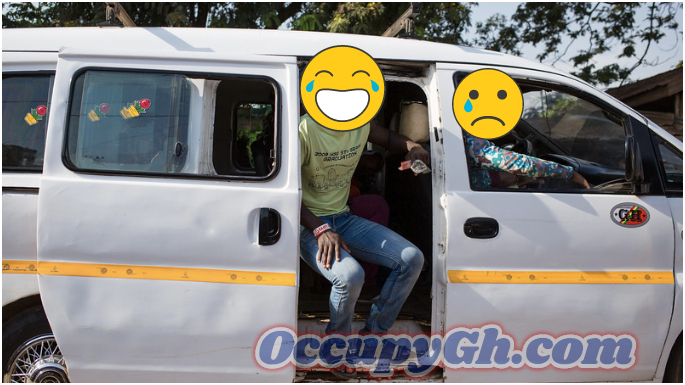 A commercial bus (trotro) driver last Tuesday night had the shock of his life when the conductor he was working with absconded with the entire daily sales.

The incident which occurred at about 7:45 p.m. at Odorkor in Accra was a mixture of laughter and sorrow as passengers on board the vehicle were surprised at the sudden disappearance of the conductor, also known as trotro mate.

It all began in the full glare of this reporter when the Kasoa-bound vehicle heading from Accra, with registration number GX 431-12, picked passengers at the bus stop near the traffic lights on the Graphic Road.

On the route; Obetsebi Lamptey Circle, Mpamprom, Kaneshie, First Light, Quarters, Atico, Dansoman Junction and Darkuman Junction, through to Kasoa, some passengers alighted while others also boarded the vehicle.

The driver, who only gave his name as Ato, was initially unaware of the disappearance of his mate.

He, therefore, started calling on the mate to close the door of the bus for him to continue the journey but there was no response from the mate’s end.

After about three minutes, the driver then decided to get down from the vehicle to find out what was happening. It was then that he realised the mate was nowhere to be found.

Having realised that the mate was gone with his money, he (driver) suddenly slammed the door of the vehicle and got on board.

Passengers who had by then started murmuring over the delay of the movement of the vehicle, asked the driver where his mate was. It was then that he said the mate had absconded with the day’s sales.

Asked whether he knew the mate, he said, it was someone who introduced him (mate) to him to work with for that day.

“I don’t know him it was someone who introduced him to me at CMB. I am sure I would get him,” he said.

Asked why he did not have a permanent mate, he said, “the young boys nowadays don’t want to work, they just want to make quick money. It is difficult getting someone who wants to stay with you and work”.

However, some passengers wondered why the driver would allow the mate, who he barely knew to keep the day’s sales on him.

“He shouldn’t have allowed him to keep the money. After every journey, he should have taken the money from the mate. Now he is gone where are you going to find him,” one of the passengers Kwame, queried.

Another passenger, Teacher Koku, said it was the second time such an incident was happening in his presence.

“One time I boarded a vehicle from Kasoa to Accra. As soon as we got to Graphic Road overpass, the mate said he was having a stomach upset and so wanted to use the nearby public toilet.

After waiting for like 10 minutes the driver decided to go and check the toilet, it was then that he realised the mate had disappeared.

He believed the drivers should be blamed because “I don’t understand why you just pick anybody at the lorry park to be your mate when you don’t know the person”.