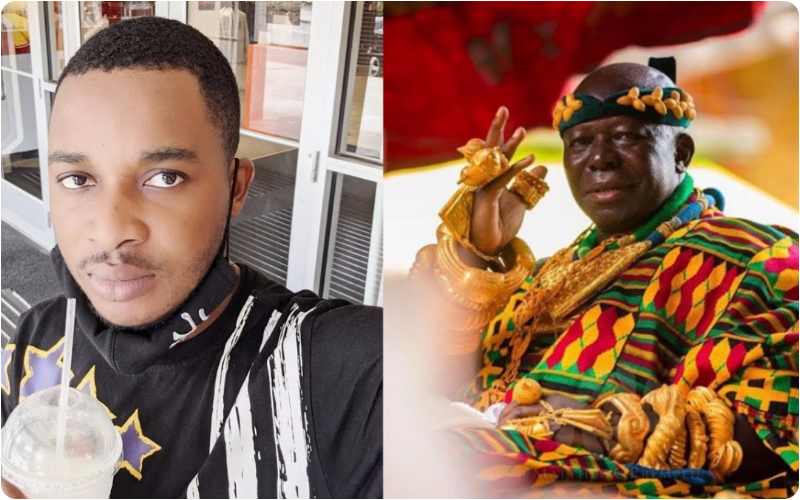 Ghanaian socialite Twene Jonas based permanently in the USA has once again surfaced online with a controversial rant directed at Asantehene Otumfuo Nana Osei Tutu II.

Twene Jonas has in a viral video sighted by occupygh.com rained unprintable insults on Otumfuo Nana Osei Tutu II for reportedly supporting MoMo tax pushed by the government of Ghana.

In his usual lengthy video, he dragged Otumfour for his ‘unwise’ decision to support the 1.5 percent E-levy imposed on distressed Ghanaians.

Jonas has asked Otumfour to learn sense after branding him a fool.

A few days ago, in one of Twene Jonas’ live videos, he asked for confirmation whether Otumfour has indeed supported the momo tax though Ghanaians are widely expressing disgust about it.

It turns out that Otumfour has thrown his weight behind President Akufo-Addo over the E-levy.

He is reported to have said that the country can only thrive if citizens are taxed.

His submission seems to have gotten to the nerves of Twene Jonas as he has gone hard on him again with insults in his new video.

Jonas went on to list the natural resources in Ghana including timber, gold, cocoa, oil, recently discovered iron and more but the leaders are greedily misusing them whilst they subject ordinary Ghanaians to pain.

He also fired Otumfour for still being unable to solve Galamsey issues in the Ashanti region.