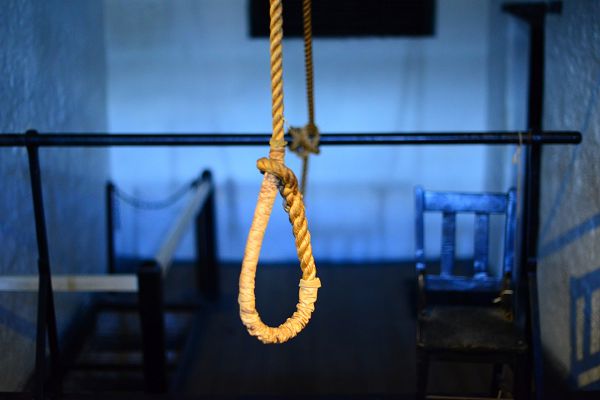 Twelve years after killing an ex-policeman on the pretext of helping him to double his money, the two killers have been sentenced to death by hanging.
The two convicts, Ebenezer Tei (aka Rastaman) and Felix Okpanye, both fishermen, were sent to the gallows by the Criminal Division of the Accra High Court.

The two beheaded the ex-police officer, Emmanuel Appiah Kubi, on March 14, 2007 and dumped his body in the Volta Lake at Old Marine, a community near Akosombo.

They pleaded not guilty to conspiracy to commit murder and murder before the court, presided over by Mr Justice Lawrence Mensah, a justice of the Court of Appeal with additional responsibility as a High Court judge.

A seven-member jury, however, found them guilty and returned a guilty verdict.

During the trial, the prosecution called five witnesses to prove its case, while the accused defended themselves without calling any witnesses.

The facts, as presented by the prosecution, were that Kubi was dismissed from the Ghana Police Service in 2006 for misconduct.

After his dismissal, his father gave him GH¢4,000 to start a business, but Kubi gave the money to Tei, Okpanye and a fetish priest, Famous Yevugah, who promised to double it for him.

The three, however, failed to double the money for Kubi, forcing him to mount pressure on them to refund his money.

Instead of refunding the money, the three lured Kubi to Old Marine to interact with a sea goddess in order to get his money doubled.

The three instructed him to recite some incantations, but as he was doing that, Yevugah hit him with a machete and beheaded him.

After the heinous crime, they kept the head in a sack and put the headless body in a canoe to dump the body in the lake.

Luck, however, eluded the three when the canoe capsized and in the process Yevugah, who could not swim drowned. Tei and Okpanye, however, managed to swim to safety.

After the incident, Tei fled to Burkina Faso, but Okpanye went to the Akosombo District Police Command and reported that while travelling to Kotoku Korpe with his brothers, the boat capsized and one of the brothers drowned.

The police took Okpanye to the bank of the lake together with some divers, to search for the body of Okpanye’s deceased brother, but on reaching the spot, they saw blood all over the place.

The police suspected foul play but waited patiently for the body to be retrieved from the lake and after four hours of search, the headless body was finally located.
That heightened the suspicion of the police, resulting in the arrest of Okpanye.

Upon interrogation, he confessed to the police that he, Tei and Yevugah had been approached by the ex-policeman to assist him to double his money.

Okpanye further said they told the ex-policeman that they knew a fetish priest in a village across the river who could do that for him and so they decided to take him there.

However, on reaching the banks of the lake, Yevugah and Tei killed Kubi, tied his legs, arms and the abdomen with huge stones and dumped him in the lake.
Investigations later led to the arrest of Tei.
Source: Graphic.com.gh