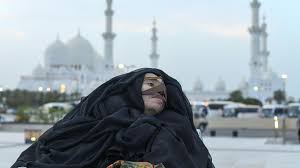 In an extremely rare medical case, a woman from the United Arab Emirates (UAE) has miraculously regained full consciousness 27 years after a car accident left her in a coma. According to reports, Munira Abdulla sustained a severe brain injury after a bus crashed into the car she was travelling in with her son.

On the day of the accident in 1991, Ms Abdullah, who was 32 then, had picked up her 4-year-old son, Omar Webair, from the school in their native United Arab Emirates. She was left seriously injured, which resulted in a coma, while Omar escaped with a minor bruise to his head as his mother crabled him in her arms right before the accident.

Doctors treating her reportedly thought that Ms Abdullah would never wake up again. However, last year, Ms Abdullah regained consciousness in a German hospital. In an interview with the UAE-based newspaper The National, Omar has opened up about the accident and about his mother’s progress, the BBC reported.

“I never gave up on her because I always had a feeling that one day she would wake up,” Omar was quoted as saying to the newspaper on Monday. “The reason I shared her story is to tell people not to lose hope on their loved ones; don’t consider them dead when they are in such a state,” he added.

Omar, who was unharmed in the accident, said his mother was sitting with him in the back seat, and when she saw the crash coming, she hugged him to protect him from the blow.

After being transferred to a hospital in London, Ms Abdullah was declared to be in a vegetative state, which means she was unresponsive but able to sense pain. Eventually, she was returned to the UAE, where she was moved to various medical facilities according to insurance requirements, said the report.

Then in 2017, the family was offered a grant by the Crown Prince Court for Ms Abdulla to be transferred to Germany, where she underwent a number of surgeries. She was also administered medication to improve her state, including her wakefulness.

According to Omar, the first word his mother said was his name. “It was her! She was calling my name, I was flying with joy; for years I have dreamt of this moment, and my name was the first word she said,” he said.

The local media reported that she can now feel pain and have some conversations as she’s now more responsive.

“She sometimes wakes me up to recite prayers with her. She gives me the topic and once I start with the prayer she continues the lines herself,” Omar added.

Now back in Abu Dhabi and confined to a wheelchair, Ms Abdullah is receiving regular hospital care, including physiotherapy and further rehabilitation to help improve her condition.

In this article:Bizarre, Dubai, Lifestyle