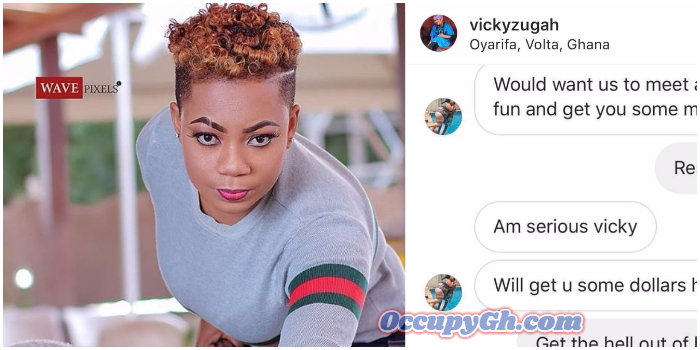 Ghanaian sensational actress, Vicky Zugah has just shared a chat a man had with her about his desire to enter her panties and pay her in return.

From the chat, the man did not want to date or be friends with Vicky Zugah and hope thing turn out good later. He wanted to go straight for the honey pot and he was shy about it all.

Being a game man, he knew these things are not for free and offered to pay the beauty queen in dollars if she agrees to sleep with him.

Vicky who found the man’s action disrespect screenshot the chat and shared it on her page to shame the man who was begging in her inbox.

However, she did not show the identity of the man but threatened to do so the next time any man jumps into her inbox and displays such bs.

“If you ever slide in my dm to spew this BS I will disrespect, name, shame and block you. Let’s respect ourselves. Yes, I’m single but no I won’t tolerate rubbish in my dm. THANK YOU.”

A few weeks ago, controversial Afia Schwarzenegger shared screenshots of some men begging to lick her in her inbox to deter others from continuing with that foolish act.