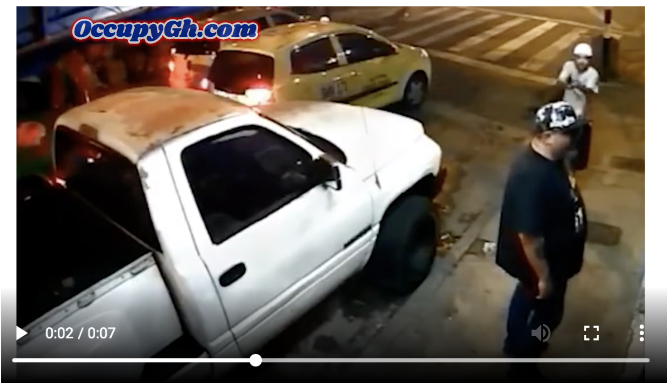 He then took aim and fired at the man in the black shirt who fled off-camera as well as another man at the bottom of the screen.

A 14-year-old boy gunned down two men in the street in Colombia. Footage shows a teenager chatting to one victim outside an off-licence in the city of Medellin last Wednesday before opening fire six times and running off. Officials in Colombia say the young suspect is accused of carrying out ten other homicides.

Police identified the victims as Dario Alexis Atehortua Guzman, 43, and Mateo Cuesta Prieto, 20. Officers said that the 43-year-old died on the spot while the 20-year-old died from his wounds on the way to hospital. A third person who was also shot and injured was treated in hospital and released the same day.

According to Pablo Ruiz Garzon, Deputy Head of Police in Valle de Aburra, the boy fatally shot two shop workers outside the store.

BREAKING:  Meek Mill Cries Out Online After Someone Stole His Phone In Ghana

In CCTV footage, a large man in a black T-shirt can be seen standing on the street just in front of a young boy, who waits until the larger man turns his back before pulling out a gun.

He then took aim and fired at the man in the black shirt who fled off-camera as well as another man at the bottom of the screen. He then also fired possibly at a third person before turning and fleeing.

Confused people who were in the shop could be seen coming out on the street to help the injured and one man appears to attempt to follow the teenage suspect who had already run away.