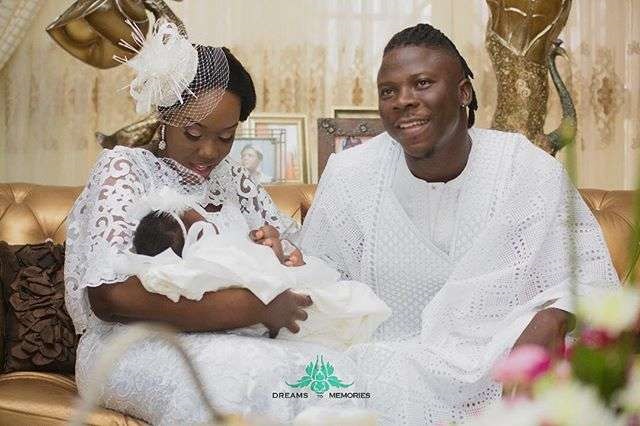 Stonebwoy welcomed his second with his beautiful wife Dr Louisa sometimes in March 2019 and today is the naming ceremony.

Stonebwoy was earlier spotted in white dress inside his car and according to him, he is on his way to naming ceremony of his son.

Stonebwoy got married to Louisa in June 2017 and it was reported sometime in July that she was heavily pregnant but Stonebwoy had denied the reports that Louisa was pregnant but pregnancy is not something you can hide forever and after nine months, there was news that his wife, Louisa has given birth.

BREAKING:  Stonebwoy Reportedly Begged For Grammy Nominations But This Happened

The BET award winner welcomed his first child, Catherine Jidula Satekla, in 2018 after tying the knot with Loiusa in 2017.

Exactly a year after given birth to his first child, rumours have been rife since Sunday, March 3, 2019, that Louisa had delivered a baby boy for the couple.

Stonebwoy Speaking on the matter on Hitz FM on Monday, March 4, 2019, Stonebwoy failed to confirm or deny the rumour.

According to the Top Skanka, fans should wait for an official announcement from his camp about welcoming a new child.

“I mean that [news] caught my attention this afternoon. But you were asking about how many babies I wanted to have right? Jah knows. On to the next one,” he said then burst into laughter.

“I mean halfway until it is totally confirmed.….It is just not officially announced yet but at the end of the day they should wait till they hear from the horse’s own mouth,” Stonebwoy added.

When the host of the show, Franky 5, probed about the possibility of a member of Stonebwoy’s team leaking the information, the artist stated that he would sack the culprit if that is true.

Stonebwoy stressed that the source of the rumour being circulated on social media had no link to his camp. The artiste tried to put the rumours to rest by saying that “nothing is hidden under the sun.”

Fast forward to today, Stonebwoy was spotted in white dress inside his car and according to him, he is on his way to naming ceremony of his son.
Source: a2zgh.com