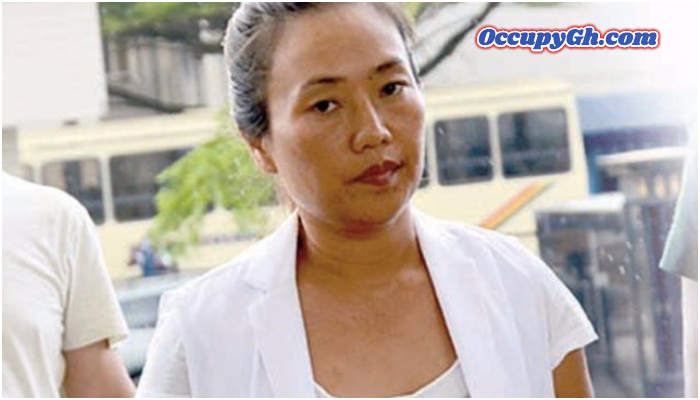 A former associate of deported Chinese illegal miner has opened the lid on ‘galamsey queen’ who, puffed up by a colluding horde of security officials, unleashed a reign of terror.

The eye-opener, Christian Addo Kuffuor told Joy FM’s Super Morning Show Thursday, he witnessed Aisha Huang pull out a gun and without flinching, load bullets into a Ghanaian, killing him instantly over a misunderstanding.

It happened in the dead of the night at a mining site.

Although Aisha Huang has been deported, her deeds are now being publicly reported after Senior Minister, Yaw Osafo Maafo, revived interest in the once-highly connected woman said to secure with sex, the collaboration of Ghanaian security officials.

Osafo Maafo commented that the unexplained discontinuance of her prosecution and deportation, was informed by Ghana’s interest in sealing a business deal with China.

The bashing in the media which has followed his comment, has been sustained at least long enough for Christian Addo Kuffour to hear of Aisha Huang’s deportation.

More than four months since she was flown back via Ethiopian Airlines, the former associate was on the line to reveal his shock at hearing the old news for the first time.

“When I heard they had remanded Aisha, I was shocked! Who are you to arrest Aisha? How can you dare arrest her,” he spoke in Twi, confirming her reported untouchability.

Christian recalled striking a working relationship with Aisha Huang through soldiers who asked him to help her illegal work.

“I have never done galamsey before,” he said.

Before the government’s anti-illegal mining taskforce would storm any site within Aisha’s ravaged environment, Aisha would get a tip-off from soldiers and police officers, some of them holding no small office.

He remembered one time, these collaborating army officers instructed him to mark the junction to Aisha’s illegal mining site with coloured used tyres.

“When we see the tyres, we will drive off,” he revealed their own ‘GPS’ to evade security notice.

Aisha Huang’s business thrived even when government put boots on the ground to stamp out illegal mining. Soldiers would seize mining equipment such as excavators and hand them over to Aisha Huang to use and sometimes sell.

“The Chinese illegal miners feared and hated Aisha,” he revealed the woman’s appetite for cut-throat competition in a rat-race for Ghana’s mineral resources.

One time, he recalled, Aisha handed him a pump action gun with eight rounds of ammunition to finish off a Chinese competitor, ‘Son’ who had taken stock of brand new excavators which Aisha coveted.

“I was so afraid,” he said fully grasp with the possibility that resisting assignment could mean his own murder.

Inside the forest, he found Son in a make-shift kitchen at the mining site and disclosed Aisha’s plan to have him killed.

He said, he would fire a warning shot and return to his boss with the excuse that he met only Ghanaian illegal miners but the main target was not around.

The excuse appeared to have not without some reluctance, satisfied Aisha and his death squad who agreed to return under the cover of darkness to kill Son.

But that episode would mark a turning point among several turning points in Christian’s relationship with Aisha.

The police got wind of the incident and Christian Addo Kufuor was arrested, charged and prosecuted.

According to him, he was told to simply plead guilty to every charge in court, an advise from officers he found uncomfortable knowing he was about to be sacrificed after doing the Chinese woman’s bidding.

Christian said he heard the judge hit the gavel of judgment, handing down three-year imprisonment much to his horror at the confirmed destination to jail.

He was walked out of court into a vehicle to begin his sentence. The vehicle had Aisha sitting in the front seat and he was driven off straight – home.

Much to his shock and a testament of her prowess, Aisha had paid her way to avoid jail despite having a prison sentence slapped on him only minutes ago.

The former associate said Aisha had a ruthlessness that saw many spend time in jail and police cells at her wish.

He was not spared, recalling a time when he incurred the galamsey queen’s fury after he returned mining equipment seized from some Chinese ‘galamseyers’.

Aisha had him arrested and at her command, he was severally beaten along with others found guilty of offending the queen.

“They really beat us up…one man lost two teeth,” at the hands of the Buffalo soldiers, he revealed the traumatic experience.

But months later, Aisha Huang would go back for his associate and ask for reconciliation.

Christian said he also witnessed another Ghanaian entered into a heated disagreement with Aisha over wages.

The galamsey queen ordered a policeman to shoot the Ghanaian, an order that saw the man run for his life until shots crippled his escape.

Blood oozing, the immobilised man was sent to the hospital with Aisha footing the bills until he recovered. But he has been left maimed, he said.

“Aisha can kill you easily,” he stressed how she maintained a network of informants including army Captains which made chances of Aisha’s victims escaping unlikely and her arrest a suicidal quest for security officers.

But Aisha Huang was arrested after a raid at Bopotenten in the Ashanti region in May 2017, barely four months into the tenure of the Akufo-Addo government.

She faced three charges – undertaking small-scale mining operations, providing mine support services without valid registration with the Minerals Commission, all contrary to the Minerals and Mining Act and illegal employment of foreign nationals in breach of the Immigration Act.

That was not her first arrest, according to veteran journalist, Kweku Baako. Three times, Aisha was arrested and three times she was released because she blackmailed the powers that be into submission with tapes and videos of sexual encounters she commissioned Chinese women to have with the Ghanaian power brokers. She was not fourth time lucky.
Source: Myjoyonline.com

In this article:Aisha Huang, Galamsey