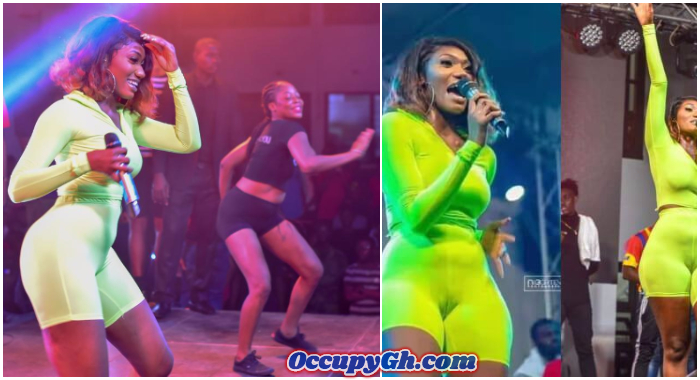 Wendy Shay’s latest photo captured during her performance at the University of Ghana’s Commonwealth hall “Artiste Night” show is currently trending on social media for the usual reason. (Video below)

Some social media users after sighting the photo and critically examining it have concluded that Wendy Shay never wore ‘pioto’ to the show.

In the photo, her cute ‘pie’ puffed up in her tight outfit and the camera captured it clear ─ with her V-shaped ‘pie’ clearly showing in the photo.

Aside from showing off her cute ‘pie’ to the audience, Wendy Shay on the night never disappointed with her performance as she was seen thrilling them with some of her hit songs.

In one of the videos, the students of the University of Ghana’s Commonwealth Hall were heard singing their own version of her smash hit “Uber Driver”.