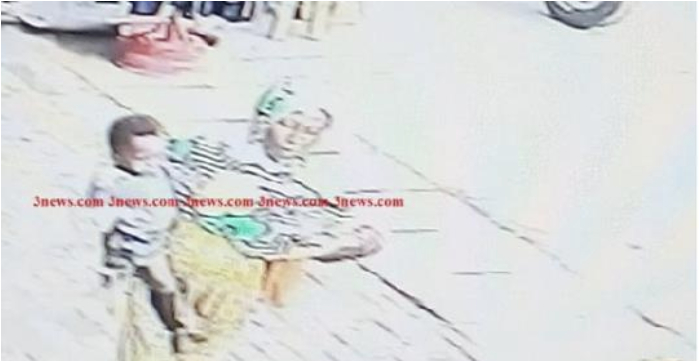 Police and residents of Takoradi are on a manhunt for a middle-aged woman who stole a year-old baby boy from his mother at the Takoradi Market Circle Friday evening.

The suspect was said to have sweet-talked the mother of the boy, Nana Akosua Bowaa, into handing the one-year-old Francis Mawusi Ahiabenu and his sibbling, Mawuli, to her to buy some pastries for them.

Wearing a straight dress with veil covering over her head, the suspect allegedly approached Akosua Bowaa and engaged her in a conversation.

“In the course of the conversation, the woman who described herself as a trader in the market asked for the names of the children and told their mother she was also an Ewe,” a witness who sells close to the mother of the baby told Connect FM’s Paa Kwesi Simpson.

“The woman [suspect] took the two siblings to a nearby joint where they sell pastries and bought the younger one some sausages, left him in the custody of the pastries seller and sent the Mawuli back to the mother,” the witness told our correspondent.

According to the witness, the suspect who was said to have promised to return Mawusi Ahiabenu to her mother later.

After the promise, she returned to the pastries shop to pick up Mawusi Ahiabenu and bolted with him, witnesses told Simpson

After about an hour, Bowaa realised her child had not been returned by the suspect.

She quickly raised an alarm triggering an instant search for the suspect and the child in the market area by the traders but could not trace them.

A CCTV camera being used by a cluster of banks around the area captured the unidentified woman who was cuddling the baby as she moved away from the market.