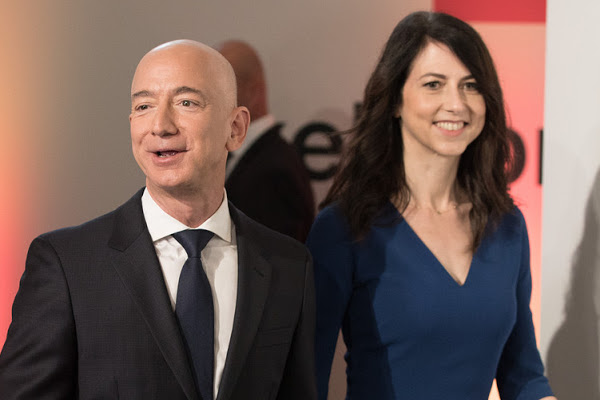 The world’s richest man, Jeff Bezos, and his wife MacKenzie have agreed a record-breaking divorce settlement worth at least $35bn (£27bn).

Ms Bezos will retain a 4% stake in online retail giant Amazon which her husband of 25 years founded.

She will also give up her interests in the Washington Post newspaper and Mr Bezos’ space travel firm Blue Origin.

Ms Bezos made the announcement in a tweet – her first and only one since joining the microblogging website this month – stating that she was “grateful to have finished the process of dissolving my marriage to Jeff with support from each other”.

Prior to the settlement, Mr Bezos held a 16.3% stake in Amazon. He will retain 75% of that holding but Ms Bezos has transferred all of her voting rights to her former husband,

The couple, who have four children, had been together since before Mr Bezos set up Amazon in 1994, with Ms Bezos employed as one of the firm’s first members of staff.

Amazon is now vast online retail business which last year generated sales of $232.8bn and has helped Mr Bezos and his family amass a $131bn fortune, according to Forbes magazine.

Ms Bezos is a successful novelist who has written two books, The Testing of Luther Albright and Traps, and was taught by Pulitzer Prize-winning author Toni Morrison at Princeton University and who once said of her pupil that she was “one of the best students I’ve ever had in my creative-writing classes… really one of the best”.

The settlement is the biggest since Mr Wilderstein and his wife, who became well-known for her cosmetic surgery, divorced in 1999.

After Mr Bezos and his wife announced in January that they would part, a US tabloid magazine published details, including private messages, of an extramarital affair with Ms Sánchez.

Mr Bezos has accused the publisher of the magazine, American Media Incorporated, of blackmail. The publisher denies the claim.