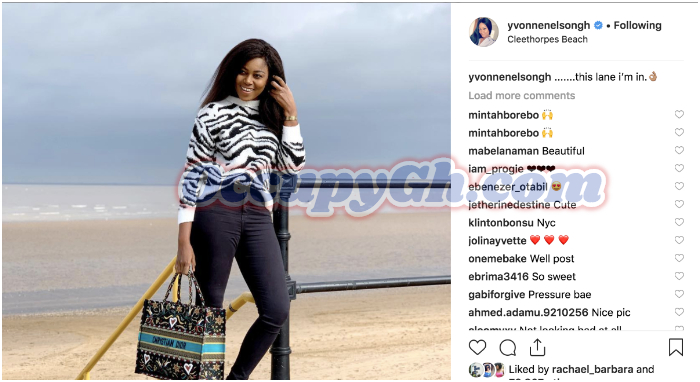 Yvonne Nelson’s daughter Ryn Roberts is gradually growing and she seems to be adapting the stylish nature of her mother.

The latest mother and daughter photo from the actress’s camp confirms this as the two of them have been spotted rocking a similar fashion style.

In the photo sighted by YEN.com.gh, Yvonne was seen wearing a black and white pullover over a pair of black jeans. Ryn, in a similar style, wore a shiny pink jacket over a blue pair of jeans.

Interestingly, the mother and daughter matched their outfits with a similar pair of Adidas sneakers as they took majestic steps along a beach.

The photo was shared from the Cleethorpes Beach, England where Yvonne and her daughter are currently on a visit.

Since the emergence of the photo on social media, fans have been applauding the actress and her daughter. @priscillanelson9507 was awed by the cuteness of Ryn: “Awwww daughter so cute just can’t wait for my little girl to start walking.” @princekennedygh thought the mummy and daughter moment was cute: “The cutest and coolest thing ever❤” @nanaamakrash5 agreed that Ryn was a cute baby: “The baby is really cute”

This is not the first time a photo of the toddler has excited fans of Yvonne Nelson and other social media users.

In February 2019, a photo of Ryn giving a heartwarming smile as she tried to take her first steps got similar positive reactions on social media. Born in October 2017, Ryn’s father is known as Jamie Roberts, a professional photographer.