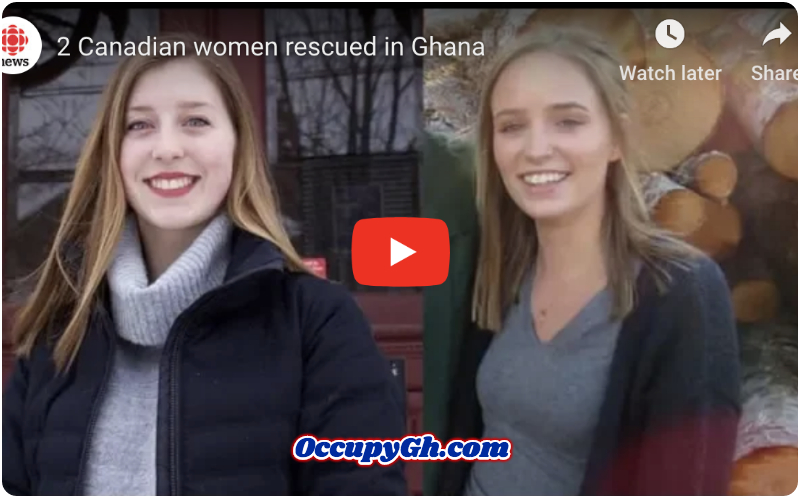 Canadian State Broadcaster, CBC, has reported the release of the two Canadian girls who were kidnapped in Kumasi last Tuesday. (Video below)

Lauren Patricia Catherine Tilley, 19, and Bailey Jordan Chitty, 20, were abducted on June 4, 2019, in Kumasi while returning to their hostel from a youth development programme organised by Youth Challenge International.

At the Asokwa Four-Junction area, Lauren, Bailey and a third person told their colleagues they were going to their hostel at Nhyiaeso around the Royal Gulf Club.

In their bulleting on TV Wednesday June 12, the broadcaster reported details of how the girls were rescued by efforts from the Ghanaian police service.
They highlighted the current state of the girls; emotionally and psychologically well and getting ready to be reunited with their families.

They also reported the Canadian government’s response to this in an email that read;

“The Government is very relieved to confirm that the two Canadians who were kidnapped in Ghana have been released. We would like to thank the Government of Ghana for their cooperation in the resolution of this case”.

Lauren Patricia Catherine Tilley, and Bailey Jordan Chitty were found in the early hours of Wednesday June 12, 2018 at Kanyasi in Kumasi.

8 suspects including 5 Ghanaians and 3 Nigerians have so far been arrested in connection with the crime.

Checkout the video below or Click here for more videos…

In this article:Canada, Crime, Kidnap, Nigeria