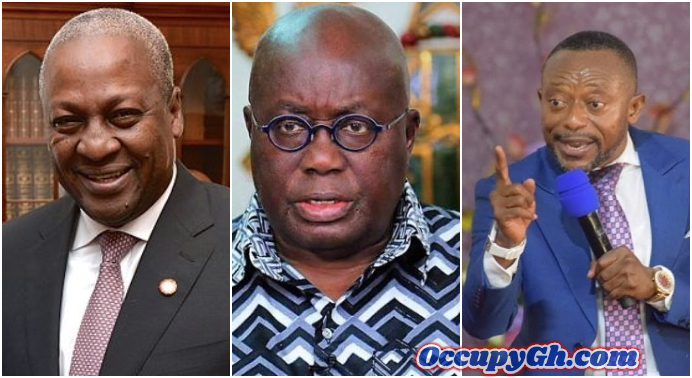 Speaking on Oman FM political morning show with Akua Asabea Croppa late last month and monitored by Daniel Kaku, the controversial prophet said God revealed to him plans by the NDC to kill him, President Akufo-Addo and other bigwigs of the NPP.

He went ahead to mention former President John Mahama as the person behind the assassination and further described Mahama as a ‘wicked person’.

Revealing why Mahama and the NDC want him dead he said “All Ghanaians should listen to me, I used to respect former President John Mahama the most but for today, I no longer respect him…if people will recall the prophecy I made towards Nigeria’s elections, I said the opposition leader will lose and this is what God revealed to me. Every pastor who predicted the election said Buhari will lose but I said he will win because it was revealed to me and I even said it in my church on Sunday before their elections”.

“Upon this revelation, Kasapa FM called to interview me on the issue and I told them it was God who revealed the winner to me. Due to what I said, Mahama and some members of the NDC held a meeting and plan to harm me because in 2016 I also revealed he would lose the elections”.

He stated that “The NDC have held meetings over me and I want them to know that I (Owusu Bempah), I’ve seen their plans. They’ve hired some people to kill me and also to try as much as possible to kill President Akufo-Addo, Vice President Bawumia, Kennedy Agyapong and Chairman Wontumi”.

He therefore charged Ghanaians to take his word seriously as the plot by Mahama and the NDC was revealed to him by God.

Listen to the audio below: