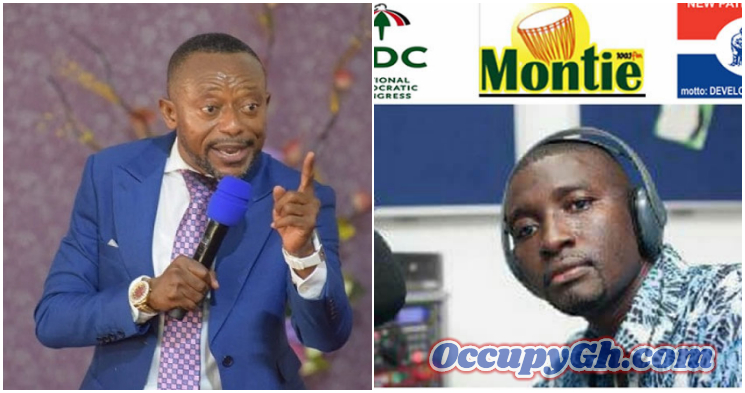 Rev. Isaac Owusu Bempah, founder and leader of the Glorious Word and Power Ministry, has just stormed the offices of Radio XYZ at Adjiringano looking for Salifu Maase aka Mugabe.

Sources close to the radio station Owusu Bempa visited station accompanied by heavily built men some of which are alleged to be members of the National Security though OccupyGh.com has not been able verify that.

Information gathered indicates that Owusu Bempah threatened to attack Mugabe Maase who has been criticizing the controversial pastor for some days over his revelations that former president Mahama was allegedly planning to kill some top officials of government including Vice President Mahamadu Bawumia.

“When he arrived at the premises he threatened to shoot anyone who would distract him. “Where is Mugabe? He thinks he is powerful eh?,” a terrified staff revealed to this portal indicating that the controversial televangelist threatened to “finish” him.

One of the eyewitnesses said “the guys he came with nearly shot a gun in the air. One lady who tried filming the act got her phone ceased.”

This is not the first time Owusu Bempah has had issues with journalists in Accra. Few months ago, he had a confrontation with a presenter at Accra-based Hot FM where he destroyed a laptop computer of a staff of the company.

What initially started as a civil discussion later turned out to be chaotic with the Man of God destroying some studio equipment while shouting on top of his voice demanding to meet one Evangelist Dominic who made denigrating comments about him.

In the ensuing melee, he described the host of the Programme, Justice Kwaku Annan as Satan for asking him questions about his inability to pray for people to collapse.

“I came here for a purpose, I did not come here to pray so that you will collapse or anything like it You are Satan, that is what you are doing. The guy you brought here who said I am not from God is the person I am looking for. I want to meet him and you are dwelling on irrelevant matters why? I have been in ministry for so long. You cannot deliberately go and bring someone to come and run me down”, he said in anger.