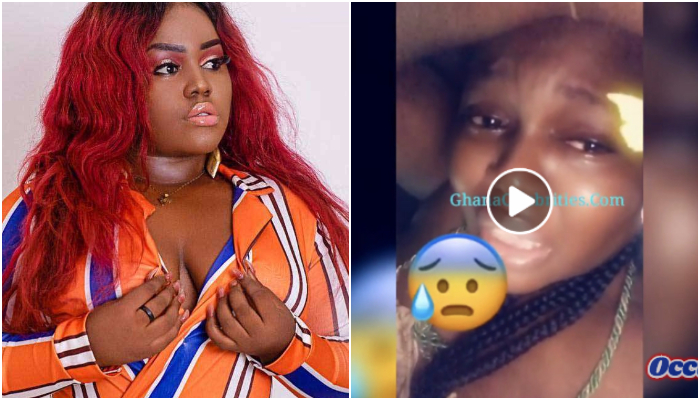 Gabriella Kotey, the estranged girlfriend of Ghanaian artiste Patapaa has extensively spoken after suffering a dreadful heartbreak from the Swedru based ‘one corner’ hitmaker. (Video below)

In a new live interview, Gabriella popularly known as Queen Peezy said it seems Patapaa is losing his mind and isn’t acting as the sane man she fell in love with.

She revealed that their relationship even before Patapaa travelled for his Europe tour was rocky.

According to her “I felt he will be snatched from me. Indeed, he told me he was going to Europe to play shows and I couldn’t go with him because I wasn’t in his travel plans.”

Queen Peezy also disclosed that they were in communication(Only twice) only to see him kissing a white woman which went viral on social media.

“We have spoken only twice since he travelled. When I saw the first video, you could hear at the background ‘pause-action’ which I was okay with it because he was shooting it for a music video,mene woara. Initially, he told me he will be shooting a part there and will back so we shoot our part —which I took normal.”Queen Peezy said.

“The second video I saw which he was kissing the white lady is disheartening. It was so real, it isn’t fake.” She added.

Gabriella also disclosed that she called Patapaa right after seeing the video but didn’t get any appropriate explanation and was told by his boyfriend to wait till he comes to Ghana.

Reacting to her collapsing and being admitted at the hospital she said, that was a video she shot a long time ago —which she reposted and it went viral again because of the circumstances.